The offshore weather forecast for Monday was perfect and a tournament record 389 of the 404 registered boats went fishing.  Each boat is eligible to fish any 3 of the 5 fishing days and with the good weather forecast offshore most boats fished today and the scales were busy.

The first fish weighed was a big winner.  At 4:55 PM the “Chasing Tails” out of VA Beach, VA slipped under the Kelley Bridge flying a boated white marlin flag.  The white was 68.5” long and tipped the scales at 74 pounds to take first place in the white marlin division.  An hour Nate Walker from VA Beach was the angler and is currently winning $1,450,000.  The 2ndwhite marlin to qualify  was Brandon Dick-Giordano fishing on the “Reel Chaos”.  The white weighed 70 pounds to take 2ndplace and is now holding $1,500,000.  How does a 70-pound fish win more money than the 74 pounder?  Boats can choose to enter Added Entry Levels and the 70-pound white was in more Levels than the 74 pounder.

The tuna division has grown rapidly over the past few years and the payouts are big.  Money changed hands often today and at 9:00 PM it was the “BAR South with angler Rob Gothier’s weighing a 77.5-pound yellowfin that held 1stplace and is clinging onto $1,125,000.  “MR Ducks” out of Ocean City with angler Bradley Gillis caught a 72-pounder good for 2ndplace and $88,000.  Billy Fox aboard the “Eastbound” landed a yellowfin tuna good for 3rdplace and 100,000 (more Added Entry Levels). Bringing up the rear was “Priceless” with a 64.5-pound yellowfin landed by Sean Garry from worth $98,000. That was at 9:00 PM.  After waiting in line for an hour two boats upset the category.  The “Crisdel”  weighed in a 201-pound bigeye which jumper into first and is holding onto $940,000. Ten minutes later the “Theresa Jean” brought in a 101-pound yellowfin caught by Chuck Metz. The fish took over 2ndplace and holds  $88,000 as of now.  The “BAR South” dropped to third and is winning $36,000.

The crowds love seeing a shark weighed and were treated to seeing a beautiful 277-pound mako shark. The fish was caught by Greg Robinson aboard “Polarizer.” The “Polarizer” was registered in the “Big Fish” Added Entry Level and is currently winning $225,000.

A huge whaoo was caught by Kyle McLaughlin fishing on “The Natural.”  The 82-pound fish was the sixth largest in Tournament history and took over 1stplace and is winning $18,000.  The big winner in the dolphin division was the 4thplace fish caught by Brett Clarence aboard the “Heatwave.”  The “Heatwave” is in the small boat categories and as of now is winning $75,000 for their 26.5-pound dolphin.

So after day 1, there are many big winners, but there is a lot of fishing left and money will change hands all week.  After today there are still  823 boat fishing days left. To better understand the tournament as the week unfolds, it helps to understand the concept of “Boat Fishing Days,” (BFDs).  Boat Fishing Days represent the number of days remaining for boats to fish.  The tournament started with 404 boats each permitted to fish 3 days which equals a total of 1,212 “Boat Fishing Days.”  On Monday, 389 boats fished which leaves 823 total BFDs remaining for the week. 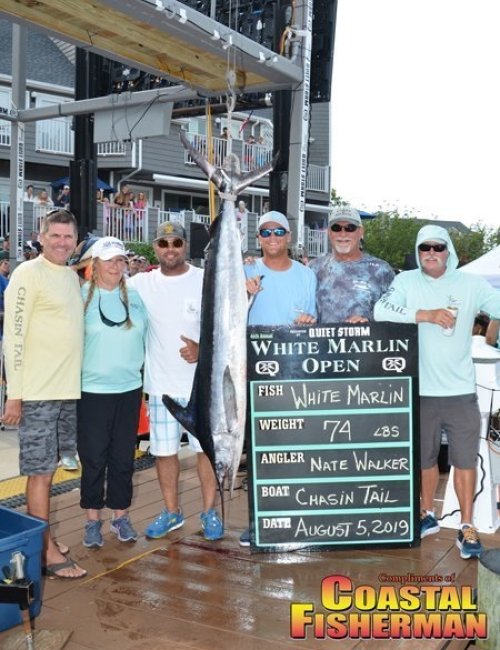 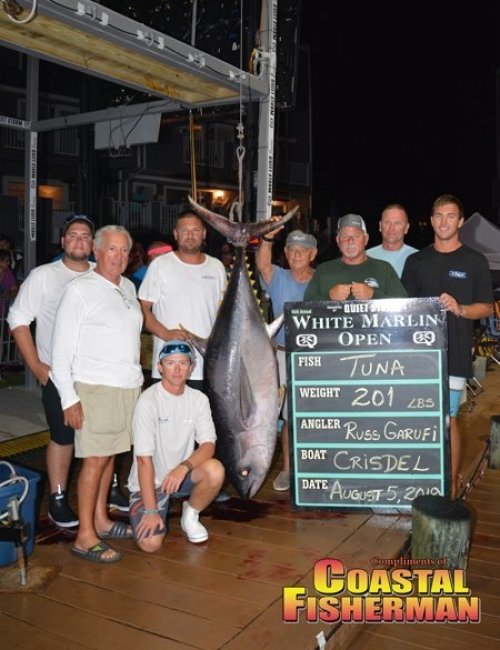