In the most dramatic finish in the 48- year history of the White Marlin Open, over
$6 million dollars changed hands in the final hour of weigh-ins at Harbour Island
Marina on Friday.
Mike Atkinson off the “Fender Bender” (both from Virginia Beach, VA), weighed
the first fish of the tournament. Until the last 30-minutes, his 82.5-pound white
marlin was winning $5,000,000! As the line of boats with fish to weigh dwindled
to the final three, there was one boat flying a white marlin flag. It was the “Sushi”
out of Ocean City, MD with angler Butch Wright from Arnold, MD aboard. Wight’s
white marlin tipped the scales at 85.5 pounds, taking $3,200,000 from the
“Fender Bender,” leaving them a very respectable $1,800,000. Rounding out the
white marlin division the “Billfisher”, also out of Ocean City, MD weighed a 78.5-
pound white caught by Billy Gerlach from Jupiter, FL worth to take third and
$105,000.00.
The blue marlin division saw the same change of fortunes. The second fish
weighed on Monday was a 559-pound blue marlin taken by Chris Perry aboard
“Mama C”, both also from Virginia Beach, VA. Like the “Fender Bender”, Perry’s
fish was winning $1,000,000 until the last hour. Late Friday, Scott Zurawski from
Avalon, NJ fishing aboard the “Canyon Lady” out of Cape May, NJ weighed a 511-
pound blue marlin that shaved $250,000 from the “Mama C” winnings but left
Perry in first place, for a while. Then things got crazy. The “SEVEN” out of Jupiter,
FL had made a successful trip to the scales earlier in the week. Angler Lawrence
Morejon from Stuart, FL had weighed a 137-pound tuna on Monday that took first
place and the $1,200,000 that came with it. On Friday, they showed up to the
scales again flying a boated white marlin and blue marlin flags. Their white marlin
weighed in at 72-pounds and took over third place. It was their blue marlin that
electrified the crowds. The fish caught by David Cash from Palm Beach Gardens,
FL strained the scales at 775-pounds, vaulting into first place to add another
$1,100,000 to their winnings! No boat in 48 years had ever won two divisions.
Their white marlin was pushed out of the top three when the “Sushi” showed up
at the last minute, but the boat still ended up with $2,220,000 and the respect of
all the other teams. The final blue marlin winnings were the “SEVEN” with 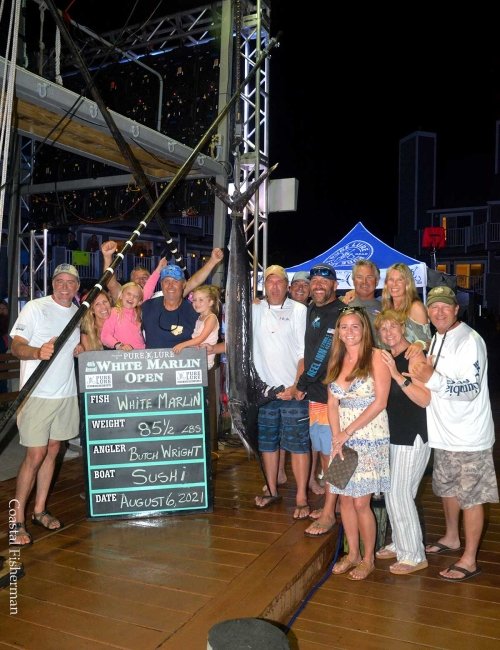