Easy come, easy go.  That is the way it works in the White Marlin Open and the 2020 edition is no exception.  (Actually, there is nothing easy about winning money during the tournament, but I digress.)  As the week unfolds and fish are weighed, the bar is set on the weights needed to crack into the prize money.  In the white marlin division, the “Drillin & Billin” out of Hatteras, NC weighed a 77-pound white marlin on Friday to take first place and the $2.9 million that came with being in all the white marlin added entry levels.  Within 24 hours, that jackpot was cut in half as the “Canyon Blues” out of Ocean City, MD weighed a monster 97-pound white marlin on Saturday that vaulted into 1st place and took $1.5 million from the now 2nd place 77-pound white.  The fish was caught by Brandon Golueke from Chester, MD and stands as the 3rd largest white marlin weighed in the 47-year White Marlin Open history.  Not too disheartening, the “Drillin & Billin” is still winning over $1.5 million for the second place white.  The "Crisdel" out of Islamorada, FL weighed a 77-pound white on Saturday good for 3rd place and $90,000.  The fish was taken by Frank Criscola from Bedminster, NJ.

While the blue marlin division is still vacant, the tournament did see 2 swordfish weighed.  Kyle Gagliardi aboard the “Jersey Boy” weighed a 273.5 swordfish that is currently the winner in the tournament's Big Fish category and is now winning $375,000.00.

While we have seen many fish weighed, the unseen, and most prestigious division of the tournament, is the billfish release points.  Boats and anglers earn points for releases of billfish and there have been a great number of releases.  The fishing has been good with 650 releases out of the 708 billfish caught through Saturday.

Over 250 are eligible to fish the final day on Sunday and there are millions that can change hands by the tip of the scale.  Join us online Sunday for the final day of the 2020 White Marlin Open. 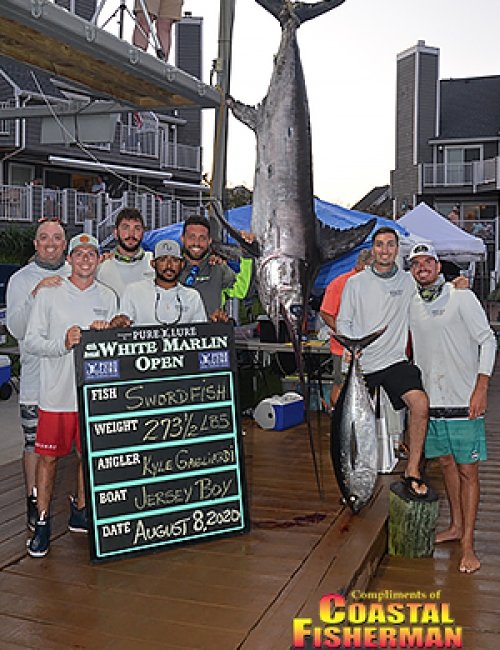