tuna take the stage on day one

Most boats used caution today as tropical storm Isaias drew closer, and just 42 of the 433 registered boats fished Day 1 of the WMO.  Most of today’s boats were tuna fishing which often takes a shorter run.  Fewer boats traveled to the canyons, but some that did have good luck with white marlin release.
The first fish to the scales Monday was a 114.5-pound tuna caught by Travis Ort from York, PA.  Ort was fishing on Ocean City’s “Restless Lady.”  Second place in the tuna category was Hunter Unruh from Townsend, DE with a 92-pound tuna caught aboard “Swords Fish” out of Indian River, DE.  In third was the “Wrecker” from Ocean City, MD with a 57-pound tuna caught by Joe Haycock from Ocean City, MD.  If the tournament ended today Ort would win $980,000, Unruh’s fish would take $250,000 and Haycock would walk with $300,000.  But of course, things will change over the week.
With Isaias expected to impact Ocean City on Tuesday, no boats are projected to fish Day 2.  Each boat is permitted to fish any 3 days of the 7-day event so there is a lot of fishing ahead.  After Isaias passes through, the offshore forecasts are light winds and calm seas the rest of the week (subject to change of course).
Most boats still have 3 days to fish, and most will travel to the canyons in pursuit of marlin worth their weight in gold.  The white marlin divisions have over $3,000,000 in prize money available while the blue marlin and tuna divisions are holding $1,000,000 each.
So, the tournament is wide open with 90% of the boats still eligible to fish 3 more days with the weather looking good after the storm moves through. 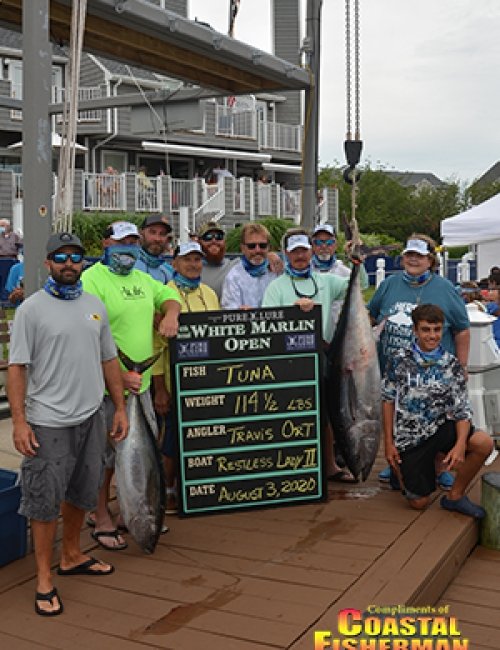 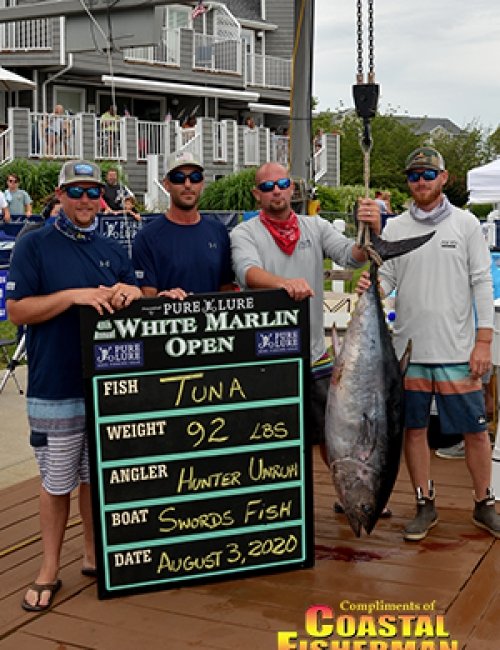